Your Eyes and a Camera: More Similar Than You Realize 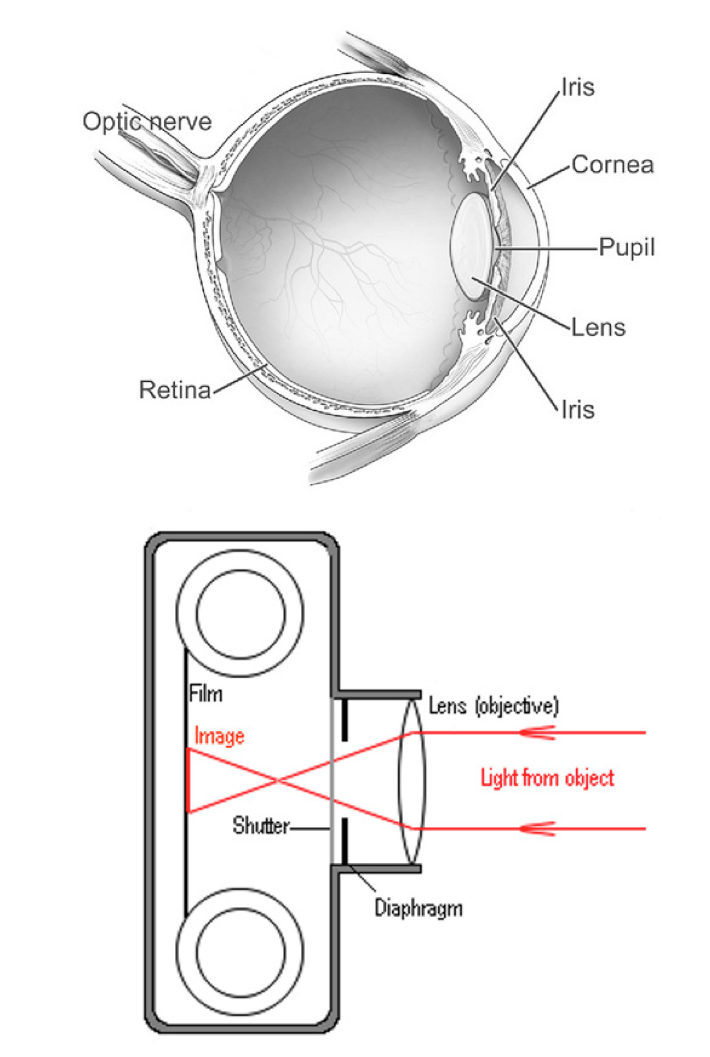 What do your eyes and the digital camera in your pocket have in common?  A lot more than you may think!  Surprisingly, the human eye and a regular digital or film camera share a lot of similar properties.  Cameras and eyes have three very similar components:

Lens
Both the eyes and cameras contain some sort of lens.  With the eye, the cornea acts as a lens in addition to another lens in the eye.  In the case of a camera, the lens is typically made up of several pieces of specially shaped glass. Lenses transmit and refract light in a way that allows things to be seen in focus.

Iris and Pupil
The iris in the eye performs the same function as a diaphragm in a camera.  They both act to control the amount of light being let in the eye or the camera.  This is also referred to as the aperture in a camera. The pupil will appear larger in dark places and smaller in bright ones; it expands or contracts to let more or less light into the eye.  The same goes for the aperture of a camera.

Retina/Sensor
When light is let into the eye or the camera, something must be there to pick up this light and turn it into an image.  In the eye, this is referred to as the retina.  In a camera, it is the image sensor for digital, and film for analog cameras.  The retina uses photoreceptor cells called cones and rods to pick up individual parts of an image including light and color.  This is much like pixels on a digital camera’s image sensor.

When light enters the eye or a camera, it is refracted in much the same way.  The image is essentially projected to the back of the eye or the camera, but flipped.  For people, the brain corrects the image so it is displayed in the proper orientation.  In a digital camera, the image processor does this work, and it is corrected in developing for a film camera.

While there are many similarities between the eye and cameras, there remain several differences.  Most notably, eyes and cameras are comprised of very different materials, with eyes being organic and cameras inorganic.  The way color is detected is also different in the eye and the camera.  In the eye, color is picked up by the cones, while color detection involves several filters applied to the sensor in a camera.  Eyes also contain fluids such as tears and blood to provide lubricant and nourishment.  Cameras don’t need nourishment.

At Infinite Eye Care we are passionate about vision. Don't hesitate to ask us any questions you may have about your eyes!